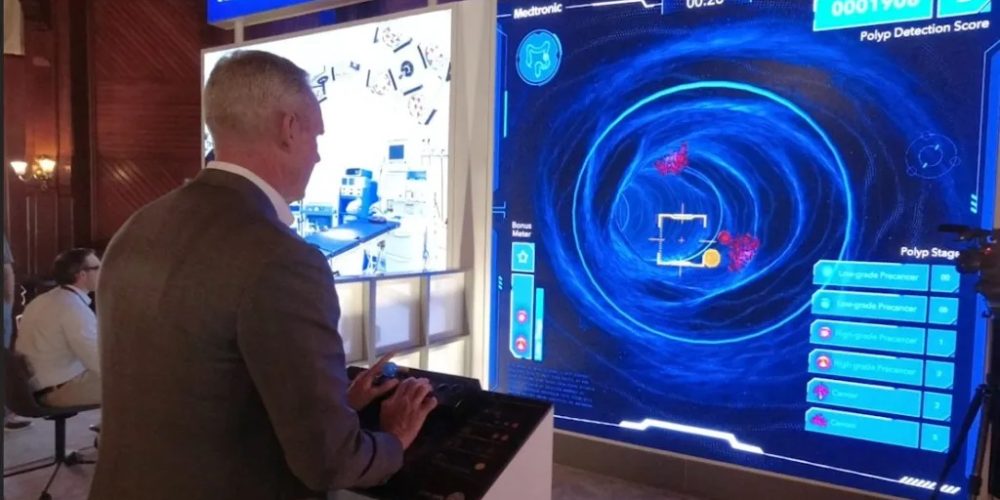 Whoever said medical device marketing is boring hasn’t seen what Groove Jones created for Medtronic. Medtronic’s Gastrointestinal team wanted something exciting and different to help them stand out at the LIFE ITSELF event. The LIFE ITSELF event, hosted by Dr. Sanjay Gupta (Chief Medical Correspondent for CNN) & Marc Hodosh (Co-founder of TEDMED, the health and medical version of the TED Conference) was a three-day retreat, converging about 50 speakers and a limited number of guests — leaders from multiple disciplines who intersect the fields of health & medicine.

Medtronic’s CEO spoke about how data and AI will revolutionize care for millions who could benefit from accessing more personalized care.

Groove Jones integrated the system’s features and capabilities into a larger-than-life, fully interactive gamified experience for Medtronic for participants to engage with at the event.

The game is displayed on an 11-foot LED wall and is played on a custom-built, gaming control panel positioned in front of the screen.

Participants learn how AI-powered systems can improve the early detection of pre-cancerous polyps in the colon and prevent colorectal cancer through compelling gameplay.

The game has two modes of play to highlight the two AI-powered systems by Medtronic. Participants can play the game using the GI Genius™ or with PillCam™ systems. The game put’s the player in charge of hunting for potentially cancerous polyps in the colon, and scanning polyps earn points in various stages to increase your score.

At the end of the game, participants see how many polyps they detected.

To add a layer of competition, we created a universal leaderboard system, which also served as a great photo opportunity for players to pose with their scores and show off on social media.