In this award winning activation, McDonald’s tapped a team of all-stars including NEXT/NOW to create a brand virtual reality sports experience for the hundreds of thousands of NASCAR fans during the 2016 Sprint Cup Series. While the races were exciting, the real game-changer was NEXT/NOW’s one-of-a-kind Brand Virtually Reality sports game on the (not yet publicly available) HTC Vive. 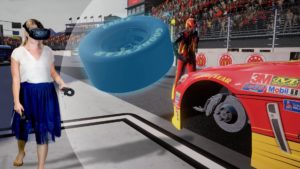 Fans put on the headset and were transported into the excitement of a virtual NASCAR pit stop where Jamie McMurray, driver of the McDonald’s #1 Chevy SS, instructs them to become part of the team by changing the driver’s side tires in a race against time. Using the HTC Vive hand paddles, users see the race car scream to a stop, then rush to change the front and rear tires. The user then hands Jamie a Big Mac and sends him back out on to the track. Finally, the user receives an email sharable with their pit stop time, which they surely use for bragging rights.

NEXT/NOW went all out with the production of this game to capture every detail including a video shoot of Jamie McMurray and recording sound effects from a real-life pit stop. We used a Hollywood-level motion capture program to create the animations of the virtual pit crew and wrapped it up in a Brand Virtual Reality sports package that wowed fans. 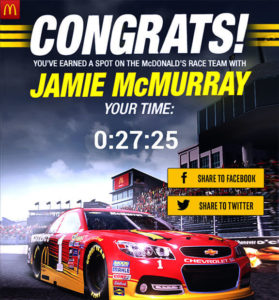