In November 2018, Cartier launched their newly redesigned Santos de Cartier watch. The challenge we had was to portray in today’s world the pioneer and bold spirit of a watch created in 1904.

The design was bold for its time, not just because it was a wrist watch, during an era when men used pocket watches, but also, because of its industrial motifs, like the apparent screws of the design and its squared face. Louis Cartier created it to help the aeronautic pioneer Santos-Dumont in his quest to conquer the skies. Santos-Dumont is considered by most Europeans as the first man to fly an aircraft, even before the Wright brothers.

So, to translate the pioneer and boldness spirit to our contemporary world, LR Studio created an AR and a VR experience for their launch event that could deliver the message better than any other traditional or interactive media.

For the pioneer spirit, LR Studio pioneered too, creating the first AR animated short film that could be seen simultaneously by 20 iPads and transport the audience to the historical moment when Cartier and Santos’ conversation triggered the creation of the watch. For the boldness, LR Studio created a VR flight simulator to have the audience feel in first-hand the boldness and audacity of Santos flying in a very primitive aircraft above the skies of Paris near the Eifel tower.

The AR experience took place inside a 200 sqm old oil tank that has been turned into an event space at the West Bund area in Shanghai called The Tank. LR Studio designed the whole space so that people felt they were in the air over Paris with a platform 2.4 meters from the ground, a map of Paris that covered the whole floor and a massive 12 meter Eifel tower in the room that not only established the feeling of being in Paris, but also pushed the technological boundaries of AR to a new level with the newly launched Apple occlusion capability.

When people arrived at the tank there was an intro music with some of the aircrafts that Santos created flying. 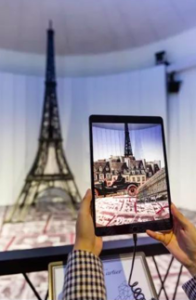 After this intro, a voice over guided the audience through the story. First, it established Santos, an eccentric Brazilian pioneer that lived in Paris at the end of 19th Century, beginning of the 20th Century, and used to transport himself over the streets of Paris in his air balloons and dirigibles. It then told the story of the historical encounter when Santos-Dumont tells Louis Cartier about the danger of checking his pocket watch in the air, this triggered the creation of the Santos wrist watch. The audience then saw through AR the Paris of beginning of 21st century, the heart of the industrial revolution that inspired Cartier on the design of the watch. Finally, we saw the peak of Santos-Dumont’s contribution to the development of aeronautics, when he flew the first self-propelled aircraft, the 14bis for 20 seconds at 220 meters.

The aircrafts and the 3D and 2D animated short film were only seen through the 20 iPads provided in the room while the room was empty with the massive Eifel tower. 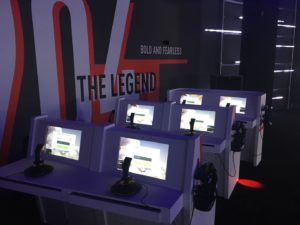 LR Studio developed a 6 players flight simulator game where users could compete against each other, but also had a chance to challenge Santos-Dumont flying his iconic 14bis plane. The aircraft where the users flew were the Demoiselle, the first mass produced plane designed by Santos-Dumont.

The thrill felt by users was just a taste of what the aeronautic pioneers should have felt at the time of Santos, as there were infinite more unknowns of what could happen in the air. The courage that was needed to get into those aircrafts was enormous and LR Studio wanted to share that feeling to the audience attending the event and at the same time make it impressive and fun. 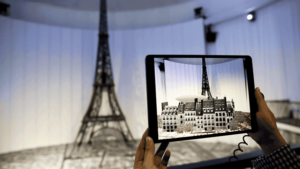 The user flew over a hyper realistic Paris with high quality clouds so that it felt as real as possible. The user had to go inside squared portals (same shape as the Santos watch) and the closer she or he got to the center the more points were accumulated. The user could control the speed and the faster she or he flew the more difficult it was to control the aircraft. Furthermore, LR Studio designed a path so that the user could have different peak experiences in the air, going up and down and feel the thrill of a small “free fall”, turning close to the Eifel tower and crossing the clouds.

When the user finished, they could scan a QR code and share the points they got with a branded message through the social media platform WeChat. 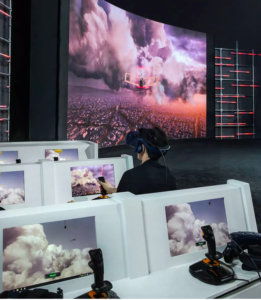 The AR and VR experiences were more than 5 months in the making. The team behind them was formed by top notch storytellers, designers, developers and game engineers from 10 nationalities. Just for recreating the clouds 3 months of work were required as it is one of the most difficult assets to create in VR and AR because of the alternating degree of opacity required to give them a realistic feeling. However, one of the biggest challenges was the work within an interdisciplinary team of filmmakers, game developers, art directors, graphic designers, and audio and sound specialist to create this immersive AR short film and the Demoiselle VR experience. 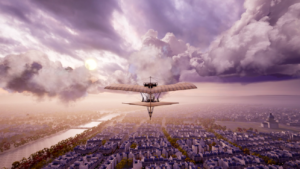 Pioneering with AR and pushing the limits of both AR and VR, to have the audience experience all the facets of the fascinating story of the more than 100 year Cartier’s Santos watch creation, we were able to translate the pioneer and boldness spirit to the 21st century tech savvy Chinese audience.