Volkswagen’s biggest launch in 2018 was the VW T-Cross, which took place in great style during the 2018 Sao Paulo Auto Show. The greatest challenge was the fact it’d not arrive in dealerships until April. Therefore, it required an urgent strategy to keep expectations high for these 5 months of waiting.

With that in mind, we created Volkswagen AR, an augmented reality app that lets users view a high detail and fidelity version of the car in 1:1 scale both interior and exterior details.

With the Volkswagen AR, VW took another step to become a Dealership of the Future, allowing people to view new models before they are launched in the market.

Moreover to allowing the user interact with the car via Augmented Reality on a 1: 1 scale, we’ve developed the 1: 3, 1: 5, 1:10 and 1:18 scales. The app’s been made even more attractive by having interactive features with car highlights, such as Park Assist 3.0, led headlights, leather interior, airbags and sunroof.

The app offers features like seeing the T-Cross inside, via Augmented Reality, checking out the comfort, connectivity, an also some of the internal and external details of the SUV. It’s possible to open doors and sunroof, project the T-Cross on any plain surface or customize it, and save a photo of it in the phone gallery. The car can also be “driven”, and the app allows the user to take pictures with T-Cross in the palm of their hand, on the smaller scale.

VZLab used ARCore and ARKit on Android and iOS respectively to make an augmented reality version of the T-Cross that users could see correctly.

To realistically reproduce the car, VZLab redid a lighter 3D mesh model that mobile devices could handle in real time. In addition, VZLab created various reflection textures, shadows and surface details that were used in shaders customized specifically for the project, with the purpose of making it look like as close as possible to Volkswagen’s photo campaign.

Volkswagen AR app was developed by VZLab only for the Brazilian market. Such was its success that they have already exported the app to other countries in South America, such as Argentina, Peru, Chile and Colombia, as well as South Africa and Mexico. 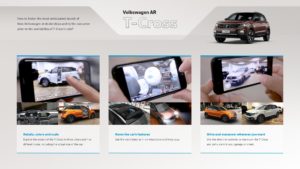