FC Dallas’ “Get In The Game” AR Mural

FC Dallas’ “Get In The Game” AR Mural 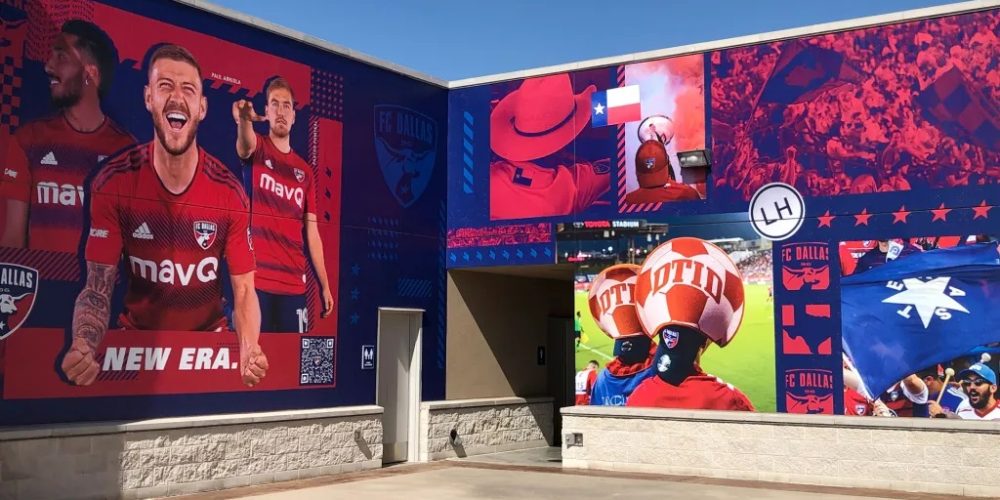 FC Dallas brought on Groove Jones to help them kick off the season with additional AR fan experiences, which included multiple AR-enabled murals and AR-enabled Toyota trucks. Soccer fans can activate the experiences by scanning QR codes on the printed images.

Fans can activate an awesome animated mural at the North end of Toyota Stadium. By activating the mural with your phone, you unlock an explosive animation where FC Dallas players – Paxton Pomykal, Jesus Ferreira, and Paul Arriola burst out of the mural with an electrical effect and a roaring sound effect.

The AR effect uses image recognition of the printed murals that were over 20 feet wide and 10 feet tall. Below are images of the team testing it out on location the night before the opening game.

Groove Jones also created a fan experience that allowed fans to activate an AR “Pose with the Players” moment. This involved creating an AR experience that would unlock AR digital doubles of the where FC Dallas players – Paxton Pomykal, Jesus Ferreira, and Paul Arriola.

After the fan launches the experience, the three FC Dallas players fly in from the sky to a designated fan spot, where they land – superhero style, and pose for a picture before running off.

This AR Avatar-style experience is totally portable and uses SLAM technology to bring it to life. The experience can be activated off one of the murals on-site at Toyota Stadium and from one of the FC Dallas wrapped Toyota trucks used for off-site mobile tours and fan events.

Behind The Scenes: Making the Experience

Since the experience included actual FC Dallas players, Groove Jones went onsite to Toyota Stadium to capture the players on the pitch where they play. Instead of motion capturing the players on a stage, they shot reference videos for their animation team to recreate. Once they captured what they needed on site, the players joined us at our studio in downtown Dallas, where their volumetric capture camera system is set up for update and R&D.

The XR Avatar Scanner is powered by 50 4K cameras that capture HDR (high dynamic range – for color and depth) using multiple focal lengths. Instantly capturing both the geometry and texture of the person standing inside.

Within seconds Groove Jones captured them and effortlessly brought them into their production pipeline.

Below are the poses Groove Jones used for the superhero flying and landing shot and the pose with a player design.

Scan with your phone and unlock the experience yourself.

FC Dallas is an American professional soccer club based in the Dallas–Fort Worth metroplex. The club competes as a Western Conference Major League Soccer (MLS) member.