From creative development through to final delivery, Koncept VR captured this luxury destination from all angles including an aerial 360 view – soaring over the Seven Mile Beach via helicopter – and a deep underwater exploration of the shipwrecked Kitty Wake with our certified dive team. Swimming with stingrays, exploring Crystals Caves and riding ponies along the famed Barker’s beach make up the variety of this VR experience. The serene beauty of the Cayman Islands has to be seen to be believed. If you cannot immediately get to those white sandy beaches, being there in 360 VR is the next best thing.

Since January 2016, Koncept VR has been collaborating with clients, such as Condé Nast, on the creative planning, production and distribution of 360 content. There is no doubt that 360 video is changing the travel industry by showcasing each destination in the most immersive way possible. 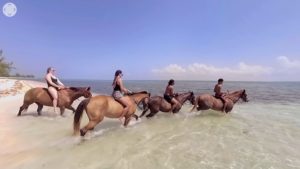