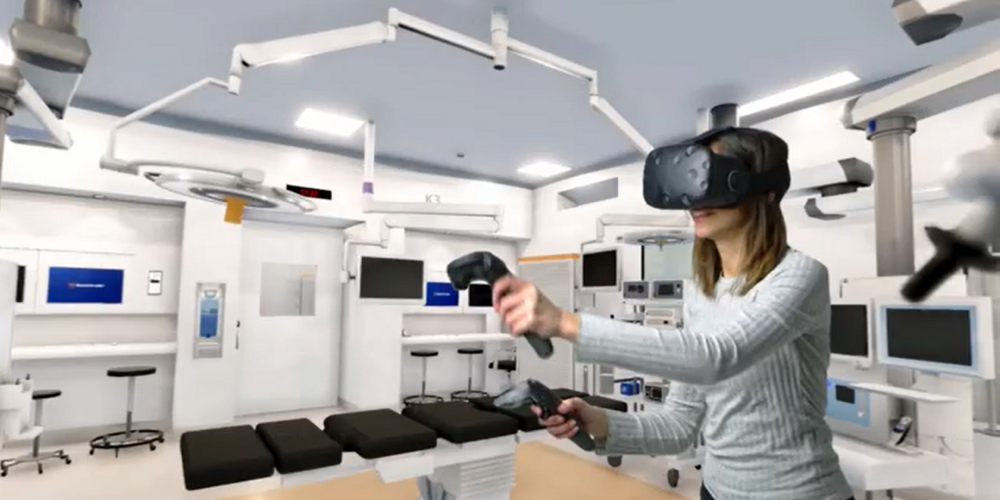 University hospital Maastricht UMC+ was looking for an efficient way to train medical staff on the procedures for quickly and correctly setting up equipment in operating rooms. BlueTea helped to develop a virtual reality (VR) solution for this. This trains operating room staff in these setup procedures without compromising the operational capacity of the ORs.

Hospitals today have become high-tech environments due to a large amount of advanced equipment used. This leads to the need for medical staff to be constantly (re)trained in the use of these complex technical solutions and applications.

At Maastricht UMC+ (MUMC+), these courses are provided for the entire healthcare staff, from trainee nurses to trainee physicians and assistant physicians, by the internal Maastricht UMC+ Academy. The education offered ranges from advanced medical training and other healthcare courses to practical training in a simulation center and skills lab. In short, all the education and training that staff needs to function properly at the various workplaces in the university hospital.

Training for so-called high-risk equipment takes place primarily through e-learning modules. “In this process, the e-learning provider replicates the equipment to be trained in the module,” indicates staff advisor and developer at Maastricht UMC+ Academy Ron Mourmans. “Then, in the e-learning module on the PC, we can mimic and train the functionality of the device in question.”

In addition, the Maastricht UMC+ Academy also uses other methodologies and systems to provide education and training to unlock third-party applications and devices. Consider, for example, the use of innovative techniques such as augmented reality (AR).

“Back in 2009, we were looking for a way to train and operate an actual device connected to a patient, without physically touching or changing the settings. With this, you bring the workplace learning environment to the patient. This required an innovative solution, which we found in the use of AR,” Ron Mourmans reveals.

“The application we found was an AR application with a virtual environment in which the device was built. Through the camera of a mobile device, in this case, special tablets, the physical device at the patient’s bedside was recognized and then virtually showed the various buttons to be operated in the right places. These could then be ‘operated’ on the tablets, without anything changing in the physical environment. Unfortunately, this project came to an end earlier than expected. Perhaps we were a little too early with this.”

A new opportunity for applications in the field of mixed reality, the interplay between AR and virtual reality (VR), arose when the MUMC+ took new operating rooms (ORs) into use a few years ago. These ORs also contain a lot of new equipment, in particular, the pendants or ‘mechanical arms’ on which all the necessary equipment ‘hangs’. Think of the lights, but also various monitors, respirators, or other equipment needed in operations.

“The pendants present in the operating rooms have two or three movable ‘arms’. In a room of 6o to 70 square meters, these must be in the correct position during surgery. This is to ensure that they do not unexpectedly hook into each other during use and to prevent damage to the often expensive equipment hanging from the pendants,” Ron Mourmans continues.

“That’s why a new instruction for the employees as needed. We discovered that there was a kind of ‘knowledge gap’ among the employees who had to start working with them. This was partly due to a strong turnover of staff, both among OR staff (anesthetists and operating assistants) and among specialists (in training). In addition, new staff was also added.” “Another challenge we faced was that ORs must be used as efficiently as possible. When ORs are unavailable due to training, it not only costs money. It is also detrimental to care because patients cannot be treated.”

Because of these challenges, Maastricht UMC+ Academy looked for a different way of training. In the search, the training department came up with virtual reality (VR). The reason for choosing a VR solution was that this type of training was booming at the time, says Ron Mourmans.

“The application found was an AR application with a virtual environment in which the device was recreated. Through the camera of a mobile device, in this case, special tablets, the physical device at the patient’s bedside was recognized and then virtually showed the various buttons to be operated in the right places. These could then be ‘operated’ on the tablets, without anything changing in the physical environment. Unfortunately, this project came to an end earlier than expected. Perhaps we were a little too early with this.”

The cooperation with BlueTea, but also with the MUMC+’s own IDEE department, which was responsible for a large part of the 3D work, ultimately resulted in a VR training with three scenarios.

“The first part is actually ‘onboarding’. This part is to teach the trainees how to use the VR equipment and environment. Getting used to the virtual environment is important because it too has ‘limits’. They also have to learn to use the controllers of the VR equipment. With these, they will soon have to operate the virtual shuttles.” “The training is also important because we have to train different age groups. We have to take into account that older age groups learn to use the technology differently than employees born after 2000, for example.”

Research from the university

Ron Mourmans goes on to say that this training scenario also includes a secondary approach. “Together with the Faculty of Health, Medicine and Life Sciences, we have linked this project to scientific research. We are trying to substantiate whether learning with VR provides added value. We have already demonstrated this with similar research into e-learning, particularly in terms of time savings. The research has been delayed because of the current pandemic, but we hope to pick it up again soon.”

The second scenario involves actual practice in setting up the ORs and, in particular, the shuttles and other equipment that need to be set up around the operating table with the patient in the right place. There is a part that assumes that the patient’s head is towards the door of the OR and a part where the feet are towards the door. In another variant, shuttles are positioned at a different location within the OR where the patient is.

“The third scenario is where the patient lies in a sterile environment and the trainees have to bring the shuttles with all the associated equipment from a random position into the correct position. Of course, they also have to do all the associated things, such as disconnecting and reconnecting cabling or moving racks with equipment hanging from the shuttles, correctly and in the right order. This prevents later delays and other problems, such as cables becoming tangled or collisions between shuttles and equipment that result in damage to expensive equipment and monitors,” Ron Mourmans points out.

“At the start of the training, it is then indicated that a certain fixed set-up is to be set up. Certain gaming elements are then added to this. For example, the preparation of the set-up in a certain timeframe. Subsequently, a completely different formation can be indicated. The idea is also to add a kind of competition element. We have learned from previous experience that this works well between colleagues or ‘professional groups’. Something of a rating can have a stimulating effect on motivation.”

According to Ron Mourmans, the collaboration between Maastricht UMC+ Academy as a client, the IDEE department of Maastricht University, and BlueTea has been very pleasant. “BlueTea was in charge of the project and used sprint sessions. That has worked well. We did have to get used to it a little because we do not come from a real business environment. Working with fixed appointments, for example, was actually quite pleasant. It gave us a bit of a grip on time. I also enjoyed working with sprints myself. I am now trying to apply it myself in smaller projects. For an organization such as a university hospital, working with sprints is a bit more difficult, of course, but I myself can welcome working in this way. The further guidance from BlueTea and the questions they asked us during the development process were also fine. The whole process went very well.”

BlueTea creates virtual simulations or games using its self-developed VirtualStudio® toolkit. VirtualStudio® is an innovative content management system for building scenarios. This means that every action in a scenario can be configured with prebuilt interaction. Furthermore, anyone can build scenarios, even without programming experience. This allows content experts to deal with the content and makes it possible to maintain the game’s scenarios in a sustainable way.

In addition, the tool helps content developers to adapt digital learning materials, without programming knowledge or complicated technology, in the developed simulations or games to evolving needs that are often procedural.

Ron Mourmans also became acquainted with this software during the VR development process. “It is quite a complicated application. You actually have to use this kind of software at least one day a week to get the hang of it and keep at it. Fortunately, BlueTea had built a good help database with decent search functionality. That made things pleasant, should you not be able to figure out how something works. It was also easy to approach someone from the development team, for example via a built-in chat tool. This allowed me to ask questions that were usually answered within 10 minutes.”

“One tip I would like to give is to be able to view what you build in the VR environment on a PC in that location. Not in 2D as you see it now, but really in the virtual environment. Because often the effect of a built element looks different on the PC than in the actual virtual environment. The best thing, of course, is to have actual VR equipment in a room where you can test it. Unfortunately, that was not possible to realize at our hospital.”

That the use of the VR solution has been successful is evident from the further plans Maastricht UMC+ Academy has. “We have already looked at how this VR application would work with AR, in a mixed reality environment. We have therefore already had the elements for this programmed in. Perhaps we can then use an overlay in a real-life situation to virtually check whether the shuttles are already in the right position for a particular operation setting. This will save a lot of time if it looks correct. We might also be able to add gaming elements. We don’t have a firm, concrete plan yet.”

“For us, the next step is to check whether the knowledge you gain from implementing this solution is sufficient. So we clearly see the new possibilities that VR can offer us,” concludes Ron Mourmans.