The Edge of Space

In Timmins, Canada on August 27th, 2015, a camera traveled an altitude of 40km for 3 ½ hours, yielding record-breaking 360 video images of the earth captured in the upper stratosphere. Edge of Space is an 11-minute VR documentary, which tells the story of this historical flight while utilizing new storytelling techniques by DEEP bound to become part of the evolving language of cinematic Virtual Reality.

Multi Emmy Award-winning filmmaker and innovator Thomas Wallner is the artistic mastermind behind Edge of Space. Wallner leads DEEP, the company that developed a proprietary VR/360 platform called Liquid Cinema, which served as a basis for ARTE360. From a technical perspective, Edge of Space employs a solution to one of the biggest problems in storytelling for a VR production—how to ensure the viewer doesn’t miss the intended focus of a shot. The solution is what DEEP calls “Forced Perspective.” This approach allows for the initially intended framing to be generated on the fly, independent of where the viewer was looking in the previous scene. 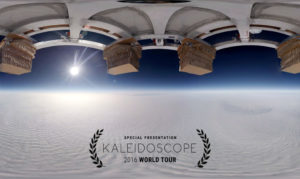 Wallner’s main inspiration for putting a spherical rig into the stratosphere was born from his admiration of photographic pursuits conducted in 1899. A group of ambitious artists attached a filming contraption to a hot air balloon and flew it 400 meters over the Tuileries Gardens in Paris, capturing the world’s first aerial 360 film footage. Wallner’s whole project is intended as an homage to these first attempts at immersive filmmaking, and the long-gone pioneers who paved our path. 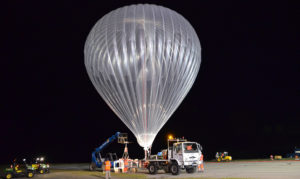 When it came time to build a structure that could withstand the challenges of the upper stratosphere, Wallner called in a true expert—Koncept VR’s CEO Joergen Geerds. Founder of Freedom360. Geerds is not only the inventor of the original 360 rig, but also has a background in art, advertising and film as well as a tireless drive to push VR’s cinematic boundaries. He equipped a balloon with two custom spherical camera systems. One system sported 15 cameras, the other 6. The cameras had to survive near-vacuum conditions and temperatures ranging from -80 to +50 degrees Celsius, requiring heavy modifications to ensure they’d still capture the footage needed. Needless to say, this VR documentary was a success and the first of its kind. 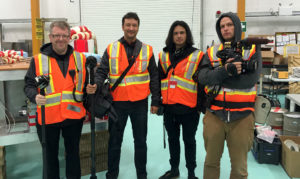