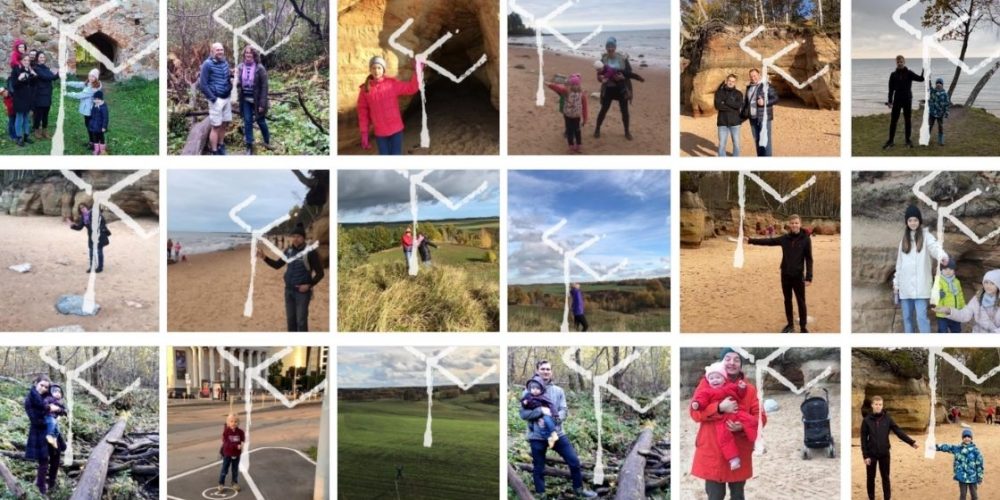 Brought to you by VFS Films, “TE!” is a Latvian TV show dedicated to rediscovering the country through local travel. It has played hide-and-seek with its dedicated viewers for close to a decade. The show’s team leaves its mascot at every filming location, inspiring people to tour the country in a bid to find it. 2020 saw the show’s traditional treasure hunting initiative turn into an augmented reality experience.

During each episode, “TE!” viewers are given a clue where they can find a replica of the show’s mascot, a rake. People have been looking for a physical copy of the symbol since 2013, but today travellers can also download an augmented reality app, “TE meklē” and be on their way. The app guides users to the approximate mascot location, enables photo captures with their augmented reality finds and lets viewers prove their treasure hunting success through social sharing.

Eight new “TE!” episodes aired in autumn 2020, with the digital mascots placed across Latvia subsequently. The viewers embraced the location-based augmented reality app with great enthusiasm, and the team placed additional 34 digital rakes in the app that date back to the filming locations of previous seasons. The app has been downloaded just under 2000 times, and user photos have generated great social media traction for the show.

The tradition to inspire local tourism

The hide and seek game of the show’s mascot serves a fundamental purpose in enticing viewers to travel to some lesser-known areas of Latvia: “It is one thing to share great stories and show the locations worth visiting, but it is a completely different challenge to actually get people to leave their homes and explore those areas themselves once they turn off the TV,” tells producer at VFS Films, Ilze Celmiņa.

The “TE!” team launched the scavenger hunt initiative in line with its second season in 2013. “We had developed a new visual identity, and our logo came out looking like a rake. From then on, we used it as our hide-and-seek symbol, placing its replica in every filming location and inviting people to travel to those areas and share photos of their finds on social media. Over the years, the shape and form of the mascot changed, but it always remained something of the physical world,” Ilze adds.

A reality that can’t be moved

In 2020, the show returned after a three-year break, and while the mascot had to continue inspiring the viewers to travel, an ever-present challenge had to be addressed.

“The physical rakes often go missing,” tells Ilze. “It may be that someone wants to hold onto the mascot once they find it. We’ve also had it drift down the river stream with flood-water. So, sometimes when the show’s followers arrive at the destination, the rake is gone, and it surely takes out the fun of the game. To tackle this issue, we wanted to find a way to place the rake in a specific location, allowing our audience to interact with it, yet it had to remain untouched. Augmented reality came in as our saviour, and the app has given us the dimension we were looking for.”

“TE meklē” mobile application uses location-based markerless augmented reality technologies with digital rakes attached to specific coordinates in the real world. Once opened on a mobile device, the app utilizes Global Positioning System (GPS) to gather data about a user’s location with high accuracy. The user is then led closer to the hiding spot, and once at the destination, the virtual object can be viewed through their device’s rear camera in the surrounding environment, allowing for photos to be captured and shared on social media.

Digital vs analogue: the merging of the worlds

While the show’s audience embraced its augmented reality scavenger hunt, the team continued to place a physical mascot in every filming location alongside the digital coordinates, shares Uldis Cekuls, CEO at VFS Films. “The rake has become a true travel symbol for our viewers, and we didn’t want someone not being able to find it if they don’t have a suitable device. Some people also hold on to the classical values, so the technology must add value to those ready to embrace it rather than eradicate the former for everyone.”

“I believe it is the best approach to using augmented reality,” continues Uldis. “We are using technologies to get people to go into nature, enjoy real surroundings and play with the opportunities that the digital world offers. These are the kind of projects I want to offer to others and enjoy with my kids. I don’t want them to be just fully immersed in technologies and forget what is happening around us.”

Having both physical and digital versions for the hide-and-seek game throughout the last season let the team compare the take up of each. “If we were to draw a growth curve, we would see that the application engagement increased as each new episode aired. As the season progressed, viewers seized in on how the app allowed them to play with the digital rake to take fun photos for social media sharing, which generated a lot of additional traction this year,” adds Uldis.

Both Ilze and Uldis agree on continuing to utilize the digital world to inspire viewers to tour Latvia, hoping to update the app with more interactive features and game elements as the next season comes to fruition.