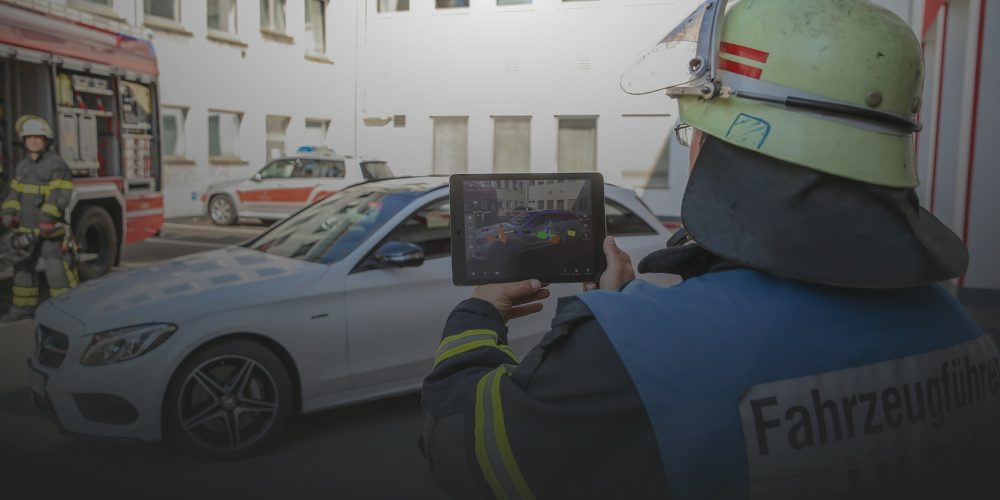 Every second counts in a car acci­dent. In November 2013 Daimler laun­ched the MB Assist app for smart­phones and tablets to provide rescuers with imme­diate digital rescue infor­ma­tion about the vehicle model involved in a crash. Emer­gency services and first respon­ders have since been able to scan a QR sticker located on the vehicle to digi­tally view the loca­tion of poten­ti­ally hazar­dous internal compon­ents (such as fuel lines and high voltage connections). After 2 years of successful imple­men­ta­tion, Daimler wanted to improve the visual repre­sen­ta­tion of struc­tural infor­ma­tion to once again improve the safety and effi­ci­ency for rescuers and crash victims alike.

Augmented Reality takes the Daimler Rescue Cards app “MB Assist” to the next level. Now, emergency services and first responders can use augmented reality to view internal components of every Daimler manufactured from 1990 onwards directly on the crash vehicle. Within seconds, rescuers can either choose the vehicle model in-app or scan the QR code on the car to augment the rescue information directly onto the vehicle, view a 3D VR model, or access the original rescue card diagrams.

Using color-coded representations of internal components, MB Assist displays key zones to be wary of when cutting through vehicles to free trapped passengers (such as fuel lines, batteries, and other electrical components) – thus reducing the risk of further damage or injury when dismantling a vehicle at the scene to save lives. “MB Assist” is now available in 23 languages on global iOS app stores to help save lives across the world.