Over the last 10 years, hundreds of millions of people across the globe have perched on the edge of their seats, gathered around screens of pretty much every size, watching the mind-blowing and iconic videos of Danny MacAskill.

Fortunately for Danny and luckily for Cut Media, they’ve been behind the camera for many of these epic films; from the early days as a one-man band working on Industrial Revolutions to the iconic Imaginate and Wee Day Out films for Red Bull. Then after graduating from Danny Daycare in 2019 came another hugely successful collaboration with Red Bull; this year’s Gymnasium.

Travelling the world to the most spectacular places and putting himself and his bike through some pretty insane situations, these films serve as the pinnacle of athletic ability and represent a notable shift in the role of digital content in sports marketing – which Cut Media have been proud to have been at the forefront of since 2007, creating work with Danny and many others.

The question Cut Media always gets asked, is “What would it feel like to be Danny in one of those situations?” They have a relative insight, given the number of attempts at a trick we’ve sat through and days worth of footage we have accrued. But when it comes down to it, no one other than Danny has ever experienced anything remotely like what he has on a bike. 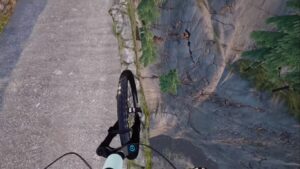 Danny MacAskill’s VR Ride Out allows audiences to get on a one-of-a-kind Santa Cruz Bicycles rig, don a VR headset and tear through two different experiences based on two of Danny’s most memorable rides; firstly along the vertiginous Collies Ledge on the Isle of Skye, taken from our film The Ridge followed by an equally sketchy balancing act based along the Landwasser Bridge in Switzerland and inspired by our 2018 film for Graubuenden Home of Trails. 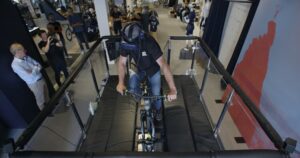 Working with immersive media specialists Rewind, Cut Media created this fully interactive and immersive experience, which they’re proud to say is truly an industry first. The headset produces 360 Binaural sound but what is really special is the bike. It not only reacts to the environment but also reacts to the rider’s position. Through measuring the pressure put out by the rider, the bike moves left and right over bumps and cracks and reacts accordingly. Combined with variable resistance pedaling, force feedback steering and braking that affect the tilt and motion of the platform, this is as close to being Danny as anyone could ever get. 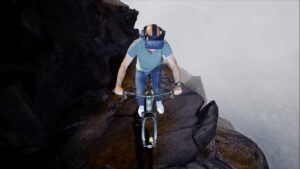 For now this one of a kind experience lives in the Ride Out Store, Amsterdam so if you’re in the area make sure you swing by and check it out for yourself.