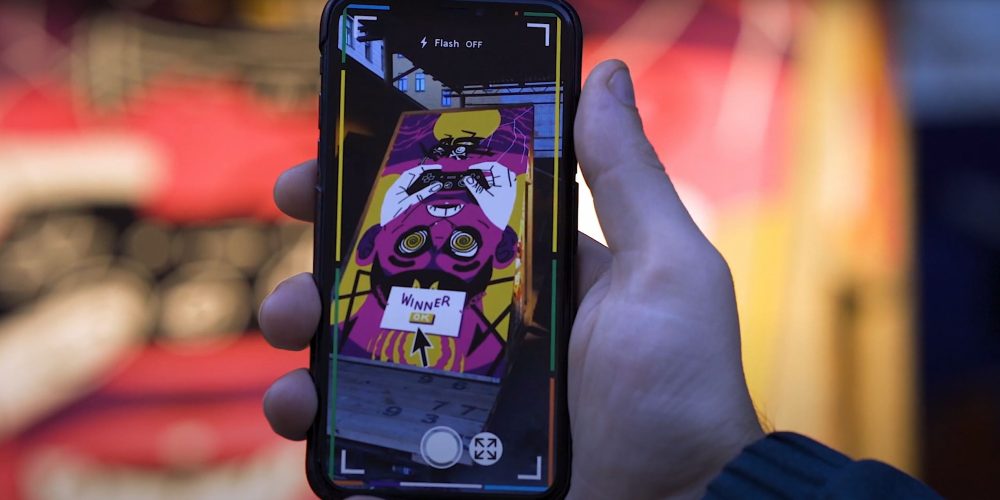 The multimedia and event company, Story Hub, uses interactive and audiovisual media to deliver added value projects across the culture, social, and education sectors. Always on the lookout for the crossroads between the analog and digital art and technologies, the agency’s co-founders, Elizabete Palasiosa and Marta Kontiņa, create contemporary content consumption opportunities and engaging storytelling experiences.

This year the Overly app came to be a part of one of the Story Hub’s latest interactive adventures in the world of Latvian poetry for children. In collaboration with “Latvijas skolas soma” (Latvian School Bag), the agency worked on a project to provide innovative and accessible cultural content for children and young people throughout Latvia. During the annual contemporary cultural forum “Baltā Nakts” in Latvia, the company set up five tents decorated with illustrations, which represented a visual interpretation of various poems. People who came to see the tents could scan the artwork with the Overly app and experience augmented reality magic.

The AR-enabled poetry tents were launched during the well-known cultural forum “Baltā Nakts” in Rīga. The event lasted just one evening, but the night proved that the concept works, and the exhibit was enjoyed by youngsters and adults alike. The five tents were decorated with 51 illustrations in total, which received from dozens to hundreds of scans each. Now the team at Story Hub plans to tour across Latvia to continue the “Latvijas skolas soma” project and present the tents to schoolchildren in other parts of the country.

“Before launching the project, we consulted a literature teacher, who revealed that kids these days have trouble interpreting the vivid world of poetry. They do not read between the lines but rather look at the text rationally, perceiving it very directly. This was a very good argument for our team to discover a way of helping children visualize and pick at their imagination,” reflects Elizabete Palasiosa, Creative Producer at Story Hub. “Thankfully, poems are a great platform for various forms of artistic expression, and we were able to showcase them through illustrations, AR animations, and musical experiences.”

Now the Story Hub team plans to work with teachers across the country to dedicate a lesson in different schools to exploring the poetry through multimedia storytelling. “The featured poems are designed for children between 4th and 7th grade. We want them to meet with poetry playfully and engage with it. And that is exactly what we are doing through this project ourselves — playing with poetry by adding layers to it. This multimedia experience showcases that between classical and modern forms of art and communication, no conflicts exist. Each helps the other to tell the story, while living different lives alongside each other,” adds Elizabete.

When you implement an augmented reality layer within your content, your job has just begun, says Elizabete. “Communication is key. You cannot just put up a sign and leave people with a gadget to get on with exploring. The technology is still unfamiliar, and I believe that dedicated people at events who explain the augmented reality concept are crucial and they were an integral part of our exhibit at “Baltā Nakts”.

“Their job is to be next to consumers, show what is happening on their phones, explain the process, get people excited to see the same on their own devices. It is essential for the user journey to set points where you can inspire people to try it. Communication is fundamental.”

Augmented reality is yet to be discovered by the majority

Communicating and inspiring others to explore AR is especially important because people are still getting accustomed to the technology. “While in our digital bubble, we may think that augmented reality is a well-known concept, our event once again highlighted that for the majority of people, it is still a complete miracle, an upcoming trend. Some visitors even thought that we were the first ones in the world to have created something like this. While it is hard to surprise people these days with the information overload we have, augmented reality can still do the trick,” tells Elizabete.

She also emphasizes that AR is not about mass communication, and event organizers have to consider the freedom each person should have with it. “We’ve worked with AR for a few years, and today more people are ready to explore it, but it is still not a “one size fits all” advertising approach. We are at a stage with this technology, where we are testing its relationship with people.

“We can read a theory on how to produce a movie, but we are still stuck for information on augmented reality. We need to establish in what context people are ready to receive this content, how much time are they willing to spend. We could see at our launch event that there are people who download the app, scan one illustration, feel the magic, but that is enough for them. Others are completely taken by it. They will come to one of the tents first, go all around it and inside it, and move on to the next, not missing anything.”

“Advertisers are talking about those three seconds when we have to capture people’s attention if we want our product to be seen. I strongly believe this concept can stay with the traditional ad industry. When it comes to AR, we want to stick with the idea that our sector has freedom of choice, freedom to build a relationship, freedom for the consumer to explore meaningful content that they enjoy on their terms. Not because they’re caught off guard with a flashy or controversial ad, but because they are truly interested in the content,” adds Elizabete.