1943: Berlin Blitz uses VR to breathe new life into the BBC Archive, transporting you to Berlin at the height of the Second World War.

In Collaboration with BBC

On the night of September 3, 1943, an Avro Lancaster bomber, dubbed F for Freddie, was bound for Berlin, 590 miles from London. Inside, its seven-man crew, which included a pilot, an engineer, a bomb aimer, also known as a bombier, a radio operator and rear and mid gunners.

What was out of the ordinary was this time there were two extra passengers on board: Welsh BBC reporter Wynford Vaughan-Thomas and his sound engineer, Reg Pidsley. Recorded from inside of the plane by Pidsley, Vaughan-Thomas reports an eye witness account of the mission, which was then broadcast on UK radio the following evening after their successful return.

1943: Berlin Blitz tells the story of the this historic event, with a mix of real archive from Vaughan-Thomas’ recordings and VR recreations of the event from aboard the Lancaster Bomber.

Recreation of Historical Event From WW2

Accurate recreation of events based on mission data and voice recordings taken during the mission.

Climb Aboard the Lancaster Bomber

Experience the Berlin bombings from the eyes of those who lived through it.

Real Audio from the BBC Archives

Listen to the accounts from eye witness Vaughan-Thomas as he describes the events happening around him. 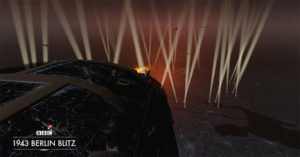 “Must download! About a 16 minute purely cinematic VR experience. Quality experience that puts you inside a Lancaster bombing crew on a bombing raid to Berlin.”
– Oculus Rift Reviews – Steam Curator

“Amazing!As a day-1 VR vet, this is one of the best things I’ve tried in VR. There is just something incredible about experiencing what this crew went through with the reporter’s real commentary. This can be deeply emotional and I think everyone should try this.”
– Lithe – Oculus Store

“I’m not gonna lie: I cried. While watching this fantastic experience, I couldn’t contain my tears. It’s really different just reading about it or seeing a movie about it and actually watching this in VR and original sound.”
– Respwn – Oculus Store 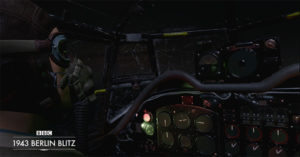