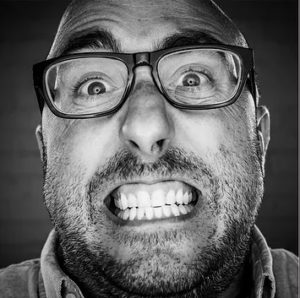 ABOUT: Keith McCabe is a 20 year veteran of the entertainment and advertising businesses. He is credited as an artist and supervisor on over 25 feature films at the industries leading studios including George Lucas’ Industrial Light and Magic, Sony Pictures, Rhythm & Hues, and many others. Some of his credits include:  “Hulk,” “Harry Potter”, “The Mummy”, and “Titanic.” McCabe helped to create some of the industries most noteworthy VR content, including Pacific Rim for Legendary Pictures, You VS. Sharapova VR for American Express, and Porsche VR.

– We got started in VR very early. Dale Carman, our ECD, was an investor in the Oculus kickstarter campaign several years ago. We received a headset in 2014 and were immediately blown away by the power of this new medium. Without hesitation, we ramped up a team to focus on VR content creation. A few months later we booked a real time rendered, fully CGI, VR project for Pacific Rim that premiered at Comicon 2014.

What is your core expertise?

– We are experts in all areas of VR production and content creation- from live action 360 movies to fully interactive real time rendered CGI experiences. We are strategic thinkers and because of our extensive experience in the VR field, we know what works and will achieve our clients goals. (For a comprehensive list of skills see the list at the bottom of this text).

– Groove Jones is a company founded by industry veterans who understand that client services are paramount to a successful production. We are experts in VR and we love working with clients to help them realize their creative vision. We thrive when we can collaborate with our clients on everything from early creative concepts all the way through the physical build and social media footprint. We have deep roots in advertising and marketing, so we understand campaign volume production. Our team is expandable and nimble. We deliver miracles on short schedules.

– We are available to work everywhere and have clients all over the world. We endeavor to find solutions that work within most budget constraints.

I own a refrigerator company factory and want to promote our model. What sort of VR experience would you suggest for me? Money is not an issue. Go crazy.

– If you owned a refrigerator company I would suggest that we build a fully interactive appliance configuration tool. Imagine putting on your headset and after answering a few simple questions with your eyes, you’re transported to your kitchen and you can choose the right refrigerator for your space. Walk up to it. Open it up. Grab food off the counter and put in inside with your VR hand controllers. Change the color, size and placement, etc. Look at information and facts, in 360, composited around the appliance. Finally, when you’ve chosen all your options you hit the purchase button and set up delivery. 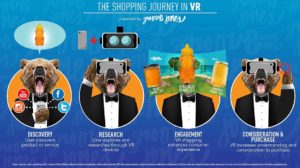 – Goldman Sachs predicts that the VR business will hit 80 billion dollars in revenue by the year 2020. There is not an industry, brand, or agency who won’t be using VR to market, sell, demo, train, and excite and delight their customers within the next 1-3 years.

– There is very little that doesn’t excite me about Virtual Reality. It’s such a dramatic new medium, that you can almost compare it to people lining up to pay a nickel to crank a nickelodeon just to catch a glimpse of a motion picture. VR has that same mystique about it. When we put people into our experiences you can see the wonder on their faces. Our VR installations consistently demand attention for our clients. Groove Jones is very excited about the future of VR.