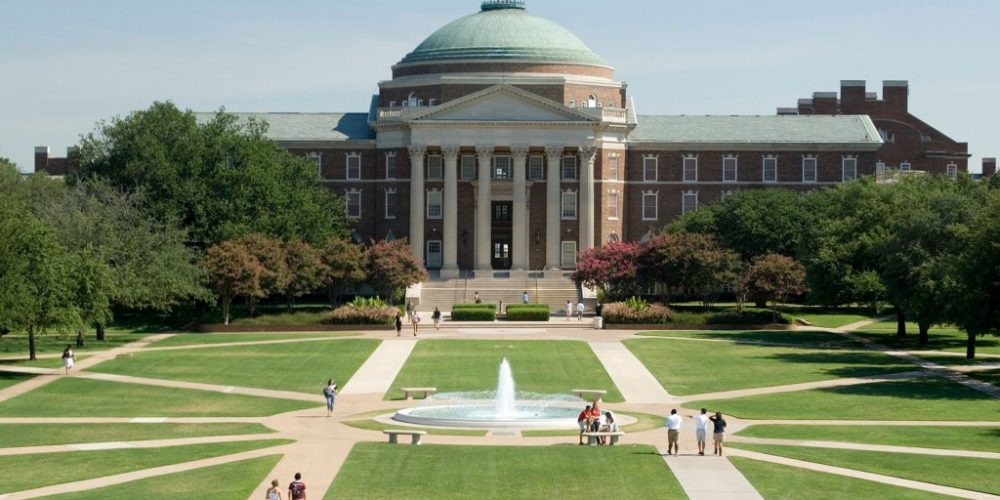 2020 was an unconventional and challenging year for college students. For seniors graduating from SMU, Rotunda Recessional is a beloved tradition representing the passage from student to SMU alum. SMU wanted to provide the Class of 2020 access to their cherished Hilltop tradition, even if looked a little bit different this year.

Since many graduating students would not be attending Commencement in person due to COVID-19, SMU brought on Groove Jones to create an augmented reality experience that would allow students and their families to step onto the campus and enter Dallas Hall through a digital Rotunda Recessional.

The WebAR experience can be launched from anywhere in the world. All that is needed is a web browser (no app required). The first part of the experience places a digital entrance to the AR portal where the user taps to enter the campus.

After passing through the archway, they find themselves standing in front of historic Dallas Hall as the sun is setting, allowing a beautiful view of the campus quadrangle. The experience is accompanied by an audio recording of SMU President R. Gerald Turner, who welcomes the user to the virtual Rotunda Recessional.

Once the user taps to enter Dallas Hall, they are transported inside, where they stand underneath the century-old stained glass Rotunda. Here they can look around and see the polished brass seal of the university, where they were first welcomed into the Mustang family during the traditional Rotunda Processional before starting their classes on the Hilltop.

Groove Jones composited an animated digital banner and confetti drop that displays within the Rotunda as Dr. Turner reflects on students’ journeys, celebrates their graduation and welcomes them to the worldwide club of Mustang alumni. Pony Up!