Groove Jones was brought on board to help the Toyota Lexus team develop an advanced AR system called the Lexus Augmented Reality Kit (LARK). This interactive application demonstrates how Augmented Reality can help with the education and training of Toyota team members to understand the features in a vehicle. The App is the future of digital user manuals for vehicles.

The Lexus AR app uses machine learning to “learn” what each of the features and controls are so that it can “identify” what is displaying on the screen. We also use Augmented Reality to place tap-able icons at each button so that the user can bring up the features and sample videos of each button.

The Application debuted at the Toyota Experience Center.

Multinational automotive manufacturer Toyota just opened its first visitor attraction in North America at their headquarters in Plano Texas. The 44,000sq ft (13,400sq m) Toyota Experience Center (TEC) is Toyota’s first and only comprehensive museum space in North America. The TEC exists to educate its visitors about Toyota’s past, present and future as a mobility company. The museum features a variety of interactive exhibits and displays, all designed to reflect on the people behind the Toyota brand.

The LARK system recognizes features inside the vehicle, and digitally displays tags that, when tapped, activate information about that product feature. A user can then tap on to view related media which includes product videos and visual demonstrations. Think of it as a digital User Manual that recognizes the vehicle and provides product information at your fingertips. 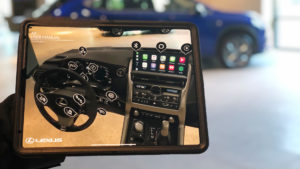 The LARK system being demonstrated at the TEC works in two modes. Mode one is an Image Recognition system that triggers from a 2D print of a Lexus dashboard, displaying AR tags over selected features of the car. Mode two allows the user to place a computer-generated, 3D version of the car’s dashboard and center console wherever they choose. A person can then learn about the vehicle features without having the actual vehicle in front of them. 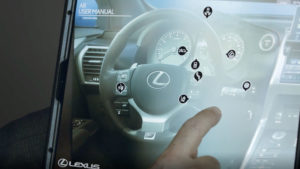