Ahead of the 2019 Kids Choice Awards, Trigger built an Instagram Face and World Effect designed to bring fans closer to all the Slime action.

Upon initially launching the augmented reality Effect via Instagram stories, fans faces would be covered in slime. After the initial Slime, the user could continue to open their mouth or tap onscreen to activate endless Slime fun. This Effect was a multi-user experience that worked in selfie and world mode. 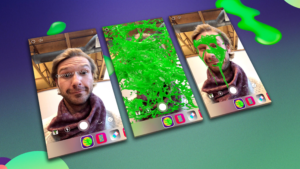 The camera effect went live with Nickelodeon’s announcement that DJ Khaled would be hosting the awards show.