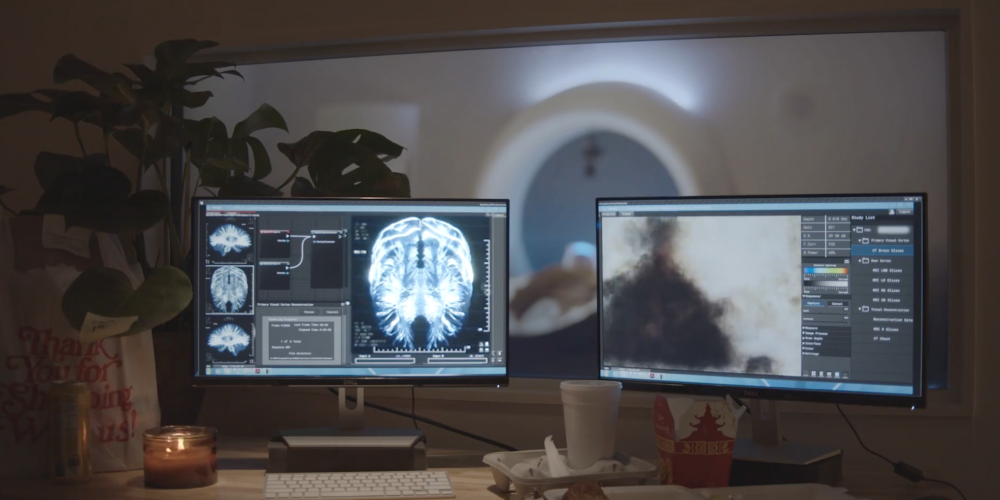 Sludge was enlisted by Hexagram to produced 14 hours of interactive live stream content for AMC’s wild new episodic series ‘Dispatches from Elsewhere’, Created by Jason Segel and based on ‘The Jejune Institute’, A famous art experience involving real life locations and events, created by Jeff Hull.

Proudly created and filmed on location in the State of New Mexico.

Kicking off the live-stream series, Sludge created a dream lab based on the real life work of Jack Gallant of UC Berkley.

As the stream went live, audience members from around the world found themselves in control of sleeping peoples dreams. They were allowed to vote to stimulate individual regions of the sleeping subjects brain, and the visuals of the brain scans would show activity based off the audience’s averaged vote. Every three minutes they would see what the dreamer would see through an GAN visual interpretation of the dream.

Each stream, a new lab technician would occupy the foreground of the video —interacting with the audience while eating Chinese food live, painting a little white van, or doing their school work. You know…keeping it casual.

The audience began to name each of them, and in the twitch chat would develop narratives about them and theorize about who the New Noology Network was. Sometimes they would bombard the email on file with job applications, ask to be a test subject or they would try to sniff out our code which connected the lab to Twitch.

All of this made perfect sense, as the NNN had peppered college campuses across the country with fliers which advertised the dream research study, inviting them to call in and schedule an appointment.

All of this took place over a six nights. People were fighting over the origin of the NNN and demanding more information, unaware of what was about to unfold.

On the sixth and final dream lab stream, one of the lab technicians was acting a bit strange, and all of the sudden disappeared off screen. Moments later to the audiences surprise, the 4th wall came crashing down.

The lab which they had been arguing and theorizing about was revealed to be an elaborate set. A real-time composite which utilized a video game engine and a fake window to trick them, and seed the next phase of the experience —The Holovan.

Was that a van?

The audience put two and two together, and they theorized that the lab tech they named “Brian”, appeared to take off with a strange vehicle which was equipped with some sort of antiquated technology on the roof.

The audience at this point was unaware that they were subtly influencing the actual narrative in real-time. The character (which they named during the first livestream) sent them all an email, asking for them to help him take down his nefarious former employer, The NNN.

A company who many times during the experience subjected him to bizarre treatment. At one point even appearing to hold him hostage in some sort of tube.

The audience began to track the whereabouts of the Holovan, using Brian’s live-streams which dropped location clues as he made his way across the country. Sometimes the users would notice their own Discord usernames in the shots.

At the end of Brian’s third holovan live-stream, the show kicked off, and it became clear to the audience there was a direct connection to this secretive company, their actions, and the plot of the AMC series.

The hashtag #findclarafirst was employed, and users around the country began reporting van sightings, which also appeared on Hexagram’s interactive NNN website. The hunt for the Van, Brian, and his strange cargo was on.

Was that a clue?

Once the ARG audience merged with the audience of the TV series, it became clear this was all an intricately planned illusion.

The characters on the show would drop subtle clues which the audience would then use to unlock new information, secret photos, locations, and it all collided with Hexagram’s custom interactive app.

What’s in the Van?

As the Van made it’s way around the country, the stakes began to rise. Eventually the van was even sighted in front of players own homes, and the mystery of who Brian had been hiding in the van began to take over conversation among the audience.

With only two more live-streams left and the season finale fast approaching, Covid-19 struck, gripping the entire country and grinding media production to a stand still.

Sludge’s team was alarmed, as their experience was designed to get people to leave their homes, and participate in a number of location based events tied to the series.

Sludge’s audience had invested 5 months into the experience, and they decided in the 11th hour they would produce a warning live stream, telling everyone to stay home.

Using Sludge’s players submitted videos, they were able to create a surreal stream that put everyone in the drivers seat of the van itself. This meta-episode would later echo the ending of Dispatches from Elsewhere.

In Sludge’s final stream, and with only days until stay at home orders became standard across the country, their audience was finally able to see what Brian had been protecting.

Episode 7 of the TV series collided head on with the ARG, as the white van made it’s way onto the TV series itself. An episode which revealed Clara, a key character from the series might not even be real.

The audience came face to face with a hologram version of Clara, who had been trapped inside of the van this entire time. A mind blowing ending which let the audience speak to the hologram for over an hour live on twitch, letting them ask questions about her, the series, and the New Noology Network.