Met – The Temple of Dendur

The Metropolitan Museum of Art reached out to Koncept VR to produce a 360° experience of the Temple of Dendur in The Sackler Wing. The Met is the largest art museum in the United States and one of the most visited museums in the world, so it goes without saying Koncept VR was thrilled at the opportunity to work with this historic institution and create something really special. The shoot brought about some new filming and editing challenges, a big part of what makes working in Virtual Reality so exciting. They are so pleased to share this piece with the world and grateful for the beautiful landscape that The Met provided for them to create it.

One of the many pleasures of working on this project was gaining rare access to the museum while it was closed to the public. Koncept VR met with members from multiple departments within The Met who were able to provide insight into the rich history of the space and determine best practices for the shoot. There were many important variables to consider not the least being the safety of the artwork and cameras throughout the rigging process as their approach utilized a combination of time-lapse recordings and lengthy pulley systems.

No challenge was too great, as Koncept VR’s CEO Joergen Geerds could attest while wading barefoot into the middle of the reflecting pool to achieve the perfect camera placement. 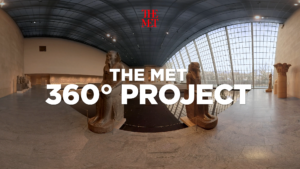 For those who are wondering, no, Koncept VR didn’t use a drone. To achieve the two moving shots – the one above the reflecting pool, and the other across the entire gallery – they extended cords across the space. One reached from up high in a utility room all the way down and across to an exit door on the far side of the gallery. Stabilization of footage moving along the pulley brought some unexpected hurdles, but the team was ultimately successful in making the rig completely invisible for the final video.

Koncept VR was honored to have work with The Met and to help share the The Temple of Dendur with viewers all over the world. The video was released on The Met’s Facebook Page using Facebook 360. The video received over 1.4 million views, making it the Museum’s most watched piece of video content on Facebook.