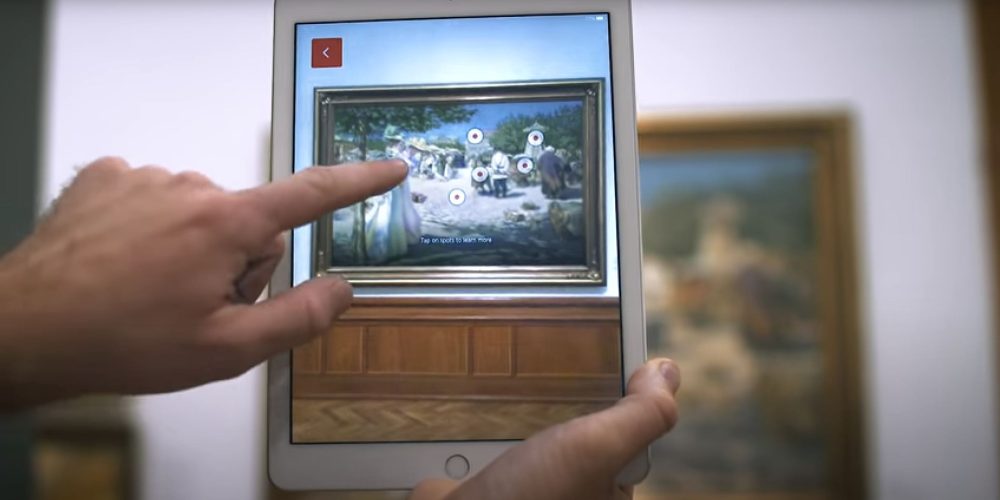 The Latvian National Museum of Art offers augmented reality exploration to its visitors in order to address the shortage of guides as well as people’s information consumption preferences.

As the Latvian National Museum of Art (LNMA) was gearing up for reopening after reconstruction, the team looked to create an innovative mobile app to reflect its new state-of-art infrastructure. The new LNMA app features augmented reality, which allows visitors to discover the composition and features of several works of art by themselves in an interactive way.

The LNMA team was clear from the onset, that the new app is not an entertainment solution but rather built around solving a real issue. The museum does not have enough guides, who could walk along with individuals and give details about all exhibits. It was key for the team to enable visitors to find out more about artworks at their own pace using the approach they prefer. The app has many functions with augmented reality being just one of them.

Annija Sauka, Head of Communication and Education Department at the LNMA tells that before designing the museum’s own app, the team looked for inspiration around the globe. “We realized that at the time, there was not much variety available, but we did not want to create a replica of a standard museum guide, the app had to offer something special. We were at a conference in Berlin when we found out about augmented reality and it was positioned as the next big thing so we got inspired to implement it in a useful way.”

Some permanent exhibits at the museum, such as paintings, have augmented reality features. AR functionality allows visitors to find out more about the artworks, their authors or personalities depicted in their work. There is also an AR feature that lets visitors explore the architectural features that were discovered during the reconstruction works. The essence of this functionality is that people are able to find out information in an engaging way at their own time and pace.

Additional AR exhibition generates a spike in the app usage

After launching the app and witnessing people’s curiosity, the team revealed a completely new exhibition based solely on AR exploration. “We launched an exhibition that looked like a bunch of framed QR codes in our halls. To discover the artwork behind the codes, visitors had to download the app and scan them. It really triggered people’s curiosity as visitors wanted to find out the hidden content and spiked the app downloads,” Annija reflects.

Content is king in augmented reality projects as well

Despite the fact that augmented reality, as quite a new technology, has entertainment value by default, Annija emphasizes that the AR layers and its content has to have the right balance. “The content that you hide behind augmented reality has to be interesting. You cannot just add photos and leave it be. The content has to add value and solve issues otherwise you use technology ineffectively and lose people’s interest in your product as well as the technology.

The app, available free of charge in the Latvian, Russian and English language versions is available on Google Play and App Store.