Kia Motors has always been an industry leader when it comes to implementing new and innovative tech in their design process.

Now, with Varjo XR-1 supported by Autodesk VRED, Kia’s visualization process can move to a totally immersive photorealistic environment. And that means global design reviews can go from days to an hour.

There’s magic happening in the Europe Design Center of Kia Motors – the South Korean automotive company. Thomas Unterluggauer is the center’s Creative Manager CGI. He’s wearing the Varjo XR-1 headset as he works on a Kia model in the studio; moving seamlessly between the real and virtual car in front of him, and making changes on the fly.

What he’s seeing and doing in the Kia studio hasn’t been possible until now. Welcome to the new reality.

When Kia’s European team tried out Varjo’s VR headset for the first time, they were blown away by the clarity and the resolution compared to all other headsets.

“For the first time, we could literally see the metallic flakes in the paint and perceive the depth and quality of the material shaders. We could see the beauty of the details more than ever before in the virtual world. Varjo is the only device capable of this level of clarity and sharpness,” Unterluggauer says.

Seeing more details in the car exterior was a breakthrough. But when Unterluggauer and the team got to explore the Varjo XR-1 mixed reality device, they realized they could also use it to take their design work to new heights.

With Varjo XR-1, designers can work with their colleagues in the physical design space they’re used to and collaborate on photorealistic, real-scale virtual car models while seeing their hands and bodies. In an immersive mixed reality experience like this, they’re able to talk as they go, give immediate feedback, and run more engaging reviews.

“Immersive collaboration works way more naturally than we expected. This is something I’ve always wished for and with the Varjo device, it’s now a reality,” adds Gregory Guillaume, Vice President of Design at Kia Motors Europe.

At the end of a mixed reality session, Unterluggauer takes off the Varjo XR-1 headset and looks back into the room. “It’s fascinating how quickly you adapt to the mixed reality. You’re tricked into thinking for a moment that reality is wrong, that there is something missing. It’s completely different to any other experience I’ve ever had in VR,” he says. And there’s that magic again.

Kia’s workflow changes up a gear with VR/XR

Located in Frankfurt, Germany, Kia’s Europe Design Center is helping to change perceptions of the Kia brand across the continent as well as worldwide. Its dedicated team of designers create concept cars of the future as well as production models for both Europe and the global market.

The ability to design and collaborate with Varjo’s photorealistic VR/XR and Autodesk VRED is a total game-changer for Kia’s designers.

Until recently, the automotive design process relied a lot on 2D reviews on screens and powerwalls, followed by physical clay models and prototypes to further refine and develop the surfaces.

As manager of the studio’s digital department, Frank Hübbe knows all too well that a 2D model is always a projection that lacks volume. “Although you can use keyboard, mouse, and screen to work efficiently in 2D, you’ll never get a fully realistic impression of the car,” he says. Today, Kia Europe’s designers are complementing their entire workflow with virtual and mixed reality. The teams are using VR/XR technologies to make their visualization work more effective and showcase projects in new ways.

For example, designers are able to review a virtual model directly against a physical model in the same room, or even augment an existing clay model with virtual details.

“With VRED and the Varjo XR-1, you have the context of the real world and the flexibility of the virtual world,” Hübbe says.

“Before, reviewing a car model with design management meant flying to Korea and took at least four days. Now, I can do it in one hour.”
– GREGORY GUILLAUME – VICE PRESIDENT OF DESIGN AT KIA MOTORS EUROPE 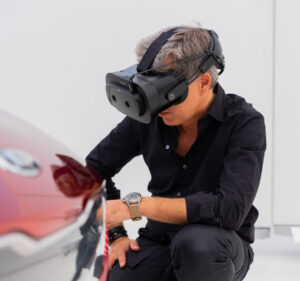 Remote collaboration when the world needs it most

The integration of Varjo XR-1 and the Autodesk VRED software packs a powerful punch for Kia. But in the midst of a global pandemic, the ability to collaborate remotely and reliably with teams across the globe has never been more crucial.

With COVID-19 currently preventing most business travel, Kia Europe has turned to Varjo’s VR/XR and Autodesk VRED’s virtual collaboration feature to continue working with the other global studios. Designers can collaborate on the same photorealistic models from wherever they’re based around the world, trusting that everything from the smallest details to the full-scale appearance of the car looks correct.

As Gregory Guillaume says, until now, if he wanted to discuss a model with the design management at Kia’s global headquarters; he’d have to fly to Korea to do it. Reviewing a digital model with design management always took a minimum of four days. “Now, I can do it in one hour,” he says. The ability to carry out design reviews virtually presents Kia with the opportunity to save vast amounts of time, work and money.

And while professionals worldwide are currently struggling with often unreliable phone and video conferencing technology, Guillaume has had promising experiences with this new collaboration technology. Despite the complexity of the VR/XR hardware and visual rendering software, his team hasn’t had any reliability issues with the Varjo XR-1 and Autodesk VRED at all. 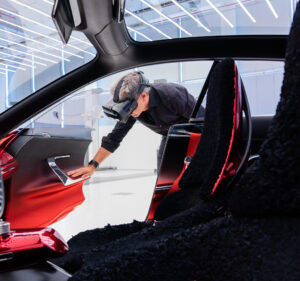 “You’d think this is so much more complicated than a video call. But collaboration has been very reliable,” he says. Guillaume and his team can be in the same virtual room with the design management team and look at and discuss the same car model in perfect detail. “That’s only possible if we trust what we’re seeing and the tools we’re using. It amazes me that something so complicated is working so naturally and easily.”

Despite all the restrictions and uncertainties that come with the global pandemic, using Varjo and Autodesk VRED is enabling KIA to continue their design collaboration with studios across the globe. “This technology is bringing us together at a time when we can’t be present in the same physical place,” Guillaume says.

And no matter how uncertain these times might feel, one thing is certain. Together, Kia, Autodesk VRED and Varjo will continue to drive collaborative automotive design forward.

Fasten your seatbelts – it’s going to be an exciting ride.

“Varjo XR-1 is a breakthrough for our design workflow. No one else has achieved this level of immersion before.”
– THOMAS UNTERLUGGAUER – CREATIVE MANAGER CGI, KIA DESIGN CENTER EUROPE 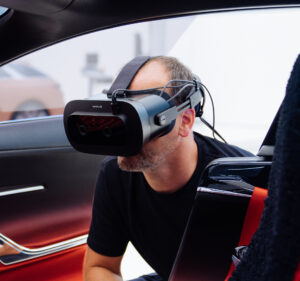 With Varjo and VRED, automotive designers can collaborate more efficiently than ever – but there’s another big benefit to bringing virtual 3D tools into the design review process.

“With VRED’s highest accuracy in design quality and the photorealism of the Varjo XR-1, designers can spot problems and make iterations sooner than ever before,” Fäth says.