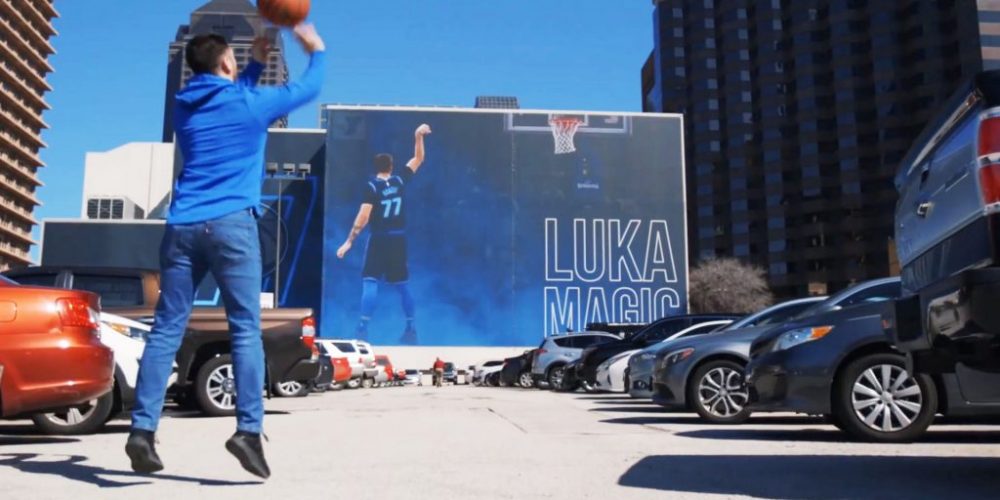 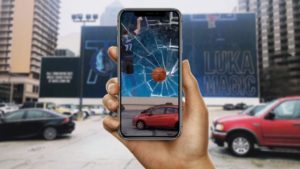 The Dallas Mavericks rookie Luka Dončić, who has dazzled on the court all season is now making moves off the court thanks to “augmented reality” technology.

At the beginning of the 2019 season, the Dallas Mavericks hired Groove Jones to create the largest augmented reality filter on Facebook, featuring Dennis Smith Jr., which blew up on the Internet. Now that the guard was traded to the New York Knicks, the Mavs wanted to update the mural with rookie Luka Dončić, who is currently set to be the NBA’s Rookie of the Year (and it’s not even close).

“The Mavs are so proud to be able to give the fans an innovative and cutting-edge experience using augmented reality to bring Luka Magic to life in the heart of Downtown Dallas. We strive to interact with MFFLs both on and off the court and are excited to see our fans’ best Luka impersonations as part of the challenge. Go Mavs!” – Jerome Elenez, CMO of the Dallas Mavericks

The Dallas Mavs have added a new twist to their latest AR mural. Fans are encouraged to show their best step back move by uploading videos of the AR experience to Instagram for the chance to win a signed Luka Dončić jersey. Fans must submit their videos before March 6th to participate!

This spectacular wall AR experience can be found on the largest canvas available in the heart of downtown Dallas. The mural stretches across the YMCA building and measures 70′ x 200′, making it the largest Augmented Reality installation using the Spark AR Studio on Facebook.

The Groove Jones team worked with the Dallas Mavericks CMO, Jerome Elenez on the development of the latest AR experience. Groove Jones created the experience through Facebook’s Spark platform. However, the studio had to had to create special plane tracking, image sequence playback, and special JavaScript timers to make this work. The experience uses components of Groove Jones’ GrooveTech AR within the Spark platform.

“We are grateful to Groove Jones who helped us bring this experience to Dallas,” said Jerome Elenez, CMO of the Dallas Mavericks.

How Does It Work?

The AR experience is being promoted through the Dallas Mavs website, mobile App, social channels as well as on the mural. Fans can engage with it by clicking on the posted links or through the Mavs App, where they will be automatically taken to the Facebook Camera Filter to activate the mural. Then all they need to do is point their camera at the mural. 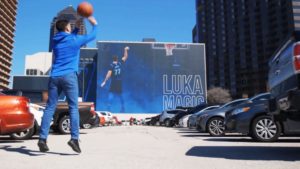 If you are interested in seeing it from the comfort of your own home, all you need is your mobile phone and a desktop/laptop computer. Have a computer monitor set up to the mural image below. Then activate the filter via this link – https://www.facebook.com/fbcameraeffects/tryit/426782594392584/ with your phone. Point your camera at the photo of the wall mural below and it will come to life! (If you are viewing this post on a PC web browser, it will ask to send you a notification to your mobile device so you can view the Facebook Filter.) 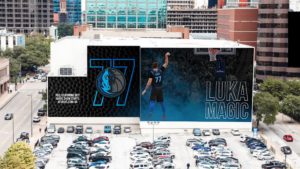 Want to watch it again? Slide the filter Blade on the Facebook Camera View and tap the Dallas Mavs icon to relaunch the filter.

As part of the promotion, the Dallas Mavericks are giving away a signed jersey by Luka Dončić. All fans need to do is capture their “Step back” move and post it to their favorite social platform with the #MavsAR. The wallscape have been active through March 15, 2019 and fans have been encouraged to share their experiences. 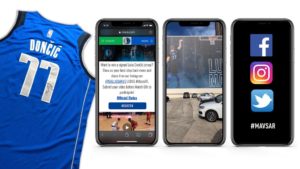 Groove Jones worked with the Clear Channel team again on the latest production. Coordinating between the physical installation and the digital production took about two weeks as final creative was being locked in. Below is a timelapse of the Clear Channel Outdoor team putting up the mural overnight.

About the Dallas Mavericks

The Dallas Mavericks are a first-class global sports and entertainment organization providing memorable experiences for fans worldwide. The Mavs compete in the National Basketball Association as a member of the Western Conference and play at American Airlines Center under the direction of Coach Rick Carlisle, General Manager Donnie Nelson, Chief Executive Officer Cynt Marshall, and Owner Mark Cuban. Since the inaugural season in 1980-81, the Mavs have won three division titles, two conference championships and one NBA championship in 2011. In addition to on-court success, the Mavs are committed to making a difference in North Texas through community outreach programs and the Mavs Foundation.