A Flood of Reality

A Flood of Reality 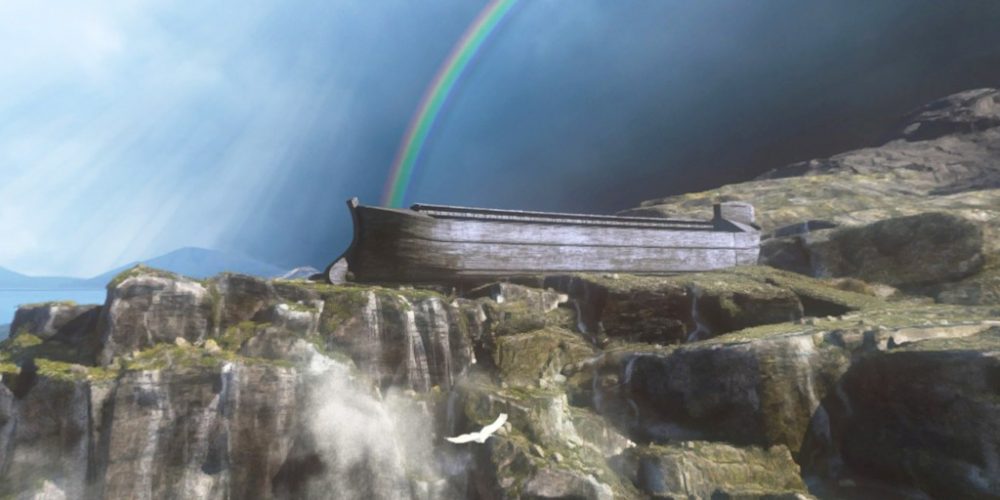 The Ark Encounter has opened a new high-tech virtual reality location-based experience known as the ‘Truth Traveler’ featuring the show “A Flood of Reality,” where guests travel 4,500 years back in time to the world of Noah and the Ark.

The animation production quality and motion ride are what you’d expect to see at Disneyland or Universal Studios, however, the story has a message. Virtual Truth Experiences, a company focused on creating family-friendly, biblically-based experiences using next-generation technologies, selected Groove Jones as their production partner to make the experience.

“A Flood of Reality” experience takes Ark Encounter park guests on a fantastic ride back in time to present the historical narrative of Noah and the great flood in a way that has never been done before.

The show is an immersive 4K virtual reality experience that feels like a ride. However, guests will be comfortably and safely seated in MX4D® Motion EFX Experience seats while wearing HTC Vive VR headsets. The seat moves and provides a variety of physical special effects synced to what you see and hear.

Strap In and Journey Back in Time

The journey begins when you leave the modern-day world, courtesy of P.O.D., a robot that controls the time travel capsule. After a brief introduction, he starts up the engines and your seats lift and begin to shake and roll. You will travel through various scenes in time.

One scene takes you thousands of years back in time when Kentucky was covered by the ocean, here you encounter a giant Plesiosaurus that swims past you and nearly takes a bite out of the ship.

After a quick adjustment of the dials by P.O.D., we time jump again and we find ourselves flying into a large open clearing, where we see the partially built Ark. Here you will meet Noah and hear his sons, Ham, Shem, and Japheth, discuss the Ark’s construction.

You then fly forward through time as you see the Ark construction being finalized. Animals slowly begin gathering to take their journey onboard.

P.O.D. then adjusts the time and we witness the fantastic flood as it begins with a crack of lightning striking right in front of you! The earth opens up, and the water begins to flood the valley. You will watch in awe as you experience the flood’s dramatic escalation, and fly up and over the Ark as P.O.D. escapes the devastation around you.

Travel Inside the Ark

When P.O.D. seeks shelter from the flood inside the Ark, you can experience and see the different animals in their pens.

Animals stick their heads out to catch a glimpse of the time-traveling guests. Riders can reach and attempt to touch the animals around them.

An exciting mishap is when the brakes suddenly stop working and guests come face to face with a juvenile Tyrannosaurus rex!

At the end of the experience, you see the massive Ark finally perched at rest on the mountains of Ararat when the flood has finally receded.

Beginning with the original concept from Virtual Truth Experiences, the Truth Traveler: A Flood of Reality script was developed and finalized by Answers in Genesis team members Ben Wilt and Mike Prather. Mike then translated the script into concept storyboards. Groove Jones then used these storyboards to generate higher fidelity shots and to begin the creative development.

Feature-film veteran Michael Spooner assisted in the production of many of the critical visual development shots.

Michael has worked in the animation industry for over thirty years (Monster University, Treasure Planet, Hotel Transylvania 2, Shrek, and Lilo and Stitch) with such notable studios as Walt Disney/Pixar, Warner Brothers, DreamWorks, and Sony Pictures Animation.

Groove Jones artists Cari Croninger and Ann Ward worked with Michael on some of the animatics and color visualizations during the storyboarding and environmental design process.

Over 50 pairs of animals were created for the experience though there were thousands of creatures on board – both large and very small. Each animal needed to be rigged and animated.

The team also had to create the humans that appear throughout history.

The AiG team provided historical insight and biblical details based upon their research for the full-sized Ark’s physical construction on-site at the Ark Encounter. Physical measurements were 510-feet long, 85-feet wide, and 51-feet high.

This enabled the Groove Jones team to seamlessly create a digital version of the Ark for the experience.

To travel back in time, visitors enjoy the experience from the Captain’s chair of a time machine. Groove Jones designed the time capsule to have a retro 50s, yet futuristic vibe to the layout of the buttons and the architecture’s feel.

Each monitor was animated for the various scenes and moments that you encounter. You could watch this multiple times and see something different each time.

Meet your Host on the Journey, P.O.D.

When you put on the VR headset, you’ll meet P.O.D., a robot who will give you a fun, guided tour as you travel back in time.

From a literal napkin sketch of P.O.D. by Answers in Genesis’ Mike Prather, Groove Jones brought P.O.D. to life in animation and refined his look to match the retro 50s futuristic style of the time capsule that P.O.D. actually became a part of.

P.O.D. adds humor and commentary as you take your journey, making lots of mistakes along the way but always getting you out of a jam. When casting his voice, we looked for a proper, English sounding voice actor to really punch up his lines’ comedic timing.

The Ark Encounter is using a stand-alone building for the Truth Traveler experience. This 48-seat, fully immersive VR motion attraction has 12 individual bays each with a MediaMation MX4D four-seat motion and EFX bench. The seats add wind blasts, scents, and full-motion, giving the sensation of flying.

“I’m excited about this fantastic high-tech VR addition. As people have come to expect at the Ark Encounter, the bar of excellence is set extremely high, as it is again with this experience,” said Ken Ham, CEO and founder of Answers in Genesis, the organization behind the Ark Encounter.

The Ark Encounter is following the procedures summarized on the website and in a detailed, robust 45-page “COVID-19 Preparedness Plan.” The park continues to conduct temperature tests of staff, regularly clean and sanitize its facilities, outfit its employees with masks and engage in other safety practices.