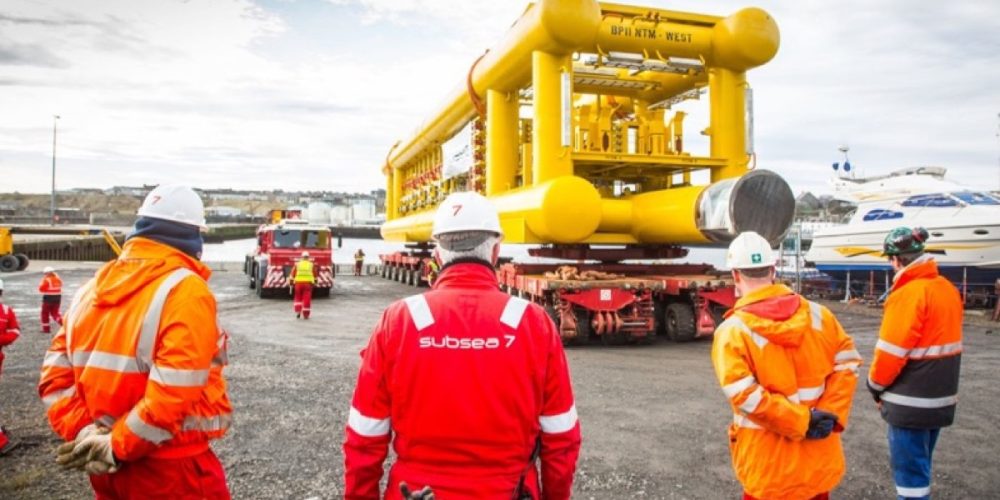 How do you transport a 35m long, 6m high, 300 ton subsea structure through the narrow streets of a small Scottish town?

Subsea 7 were awarded CNOOC International’s Buzzard Phase II Project in August 2018, for an oil field located 100km off the north-east coast of Scotland. The scope of works included project management, engineering, procurement, construction and installation of 5km of underwater pipe and the associated well and platform tie-ins – known as towheads.

There is a 40-year tradition of abnormal road transportations between two sites in Wick, North Scotland. To date over 160 Towheads have negotiated a challenging route through Wick town centre to the launch site.

Whilst this presented some challenges to the engineering team the biggest and most complex one was how to transport this mega structure through a small, narrow Scottish town without damaging buildings, lamp posts or hitting other obstructions. It “would be at least 15 per cent larger than any previous towhead we have moved through Wick” said Subsea 7 assistant project manager Craig Brown.

“In particular, the VR facility enabled Subsea 7 to identify essential route modifications which would be required to accommodate the large structure.” – Willy Watt

How do you reduce risk, optimise the solution and limit the impact on the community?

To prevent any issues and plan the work schedules Subsea 7, the haulage contractor and other parties jointly used Visionary Render to carry out a full virtual route assessment.

A high resolution, very detailed  LiDAR scan of the proposed route and surrounding areas was carried out by TexoDSI. This consisted of:

The full resolution LiDAR scan was imported natively into Visionary Render. The total size of the LiDAR scan in its raw format was over 30Gb and used to virtually walk the route. Potential pinch points or obstacles could be closely examined from any view point with multiple configurations of paths ran through.

The 3D model of the Buzzard II towhead had already been created and used in Visionary Render utilizing the design and engineering data. It had been created as part of the engineering teams design cycles and had already helped to identify reach and access issues as well as other potential design problems. The 3D model was also used as part of the Hazard Identification and Risk Assessment phase of the structural design process.

Next the detailed sweep path, vehicle and route data, overhangs, gradients, safety check points and other key information were programmed into Visionary Render to provide a complete visual and knowledge representation of the proposed route. This ability to combine structure and unstructured data within Visionary Render allows for one complete visual platform to explore the route.

Once setup the virtual scene allowed the teams to thoroughly check the route, view from any angle, animated the movement of the towhead through the streets. It also allowed the client (CNNOC) to be assured that the project would be delivered successfully. The teams could view the virtual route using a standard screen, projection system or with using a VR headset for a full immersive experience.

“We generated a unique fully-animated route model which our engineers could scrutinise and interrogate from flyover and close-up perspectives.” – Graig Brown

The ability to use 3D visualisation and VR allowed the Subsea 7 team to successfully deliver the longest, widest, heaviest structure transported through Wick safely and on time.

In an interview with a specialist Haulage magazine Willie Watt, Subsea 7 General Manager of the Wester, Wick production facility explains…

“In particular, the VR facility enabled Subsea 7 to identify essential route modifications which would be required to accommodate the large structure. Building on Mammoet’s earlier route assessments, we worked with local civil engineering contractor, Gunn’s of Lybster, on wide-ranging route alterations, ranging from dropping kerbs and realigning boundary walls to relocating utilities infrastructure. We even arranged for hinged street lighting standards to be installed which can be temporarily demounted during the towhead movement through the town.

Because of the regularity of our towhead movements, we have maintained good working relations with the local council and utilities providers, all of whom collaborated very effectively on a smooth implementation of the modifications.”

“…and most importantly no walls were knocked down during the process!” – Willy Watt