Working alongside Electric Art and Darling Brands, Start VR developed Edge 28 VR: a Real Estate VR experience that gave potential buyers a genuine glimpse into the finished apartment. Drone footage of the 360° views from each floor was blended with photo-realistic CGI renders to showcase the true dimensions of the apartment, as well as the actual views they would enjoy.

The app utilised an “on-look” interface mechanism, where customers could navigate around the apartment using intuitive linked hot-spots. A Laing + Simmons salesperson guided the customer through the experience, highlighting unique selling points. The experience ended with a take-home Cardboard viewer for the customer, allowing them to download the Edge 28 VR from either the iOS or Android app stores and re-view at their leisure.

Customers were invited to view the floor plans in a custom display suite. Once finished, they were brought to a VR viewing area and given a Samsung Gear VR headset loaded with Edge 28 VR. The in-app 3D menu showcased the various rooms available for viewing, as well as a 2D photo gallery. 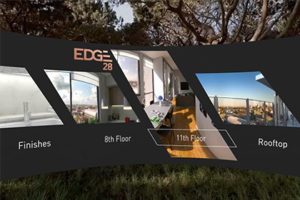 Laing + Simmons were thrilled with the attention to detail and believability of the experience. Edge 28 VR is Australia’s first off-plan Real Estate VR experience, placing interested buyers inside the apartment, and allowing them to see key areas of the space and visualise their future lives within the apartment. It thus reduces the fear of the unknown that has, up until now, been considered an inescapable reality of buying off the plan. The entirety of Edge 28 sold off the plan following the release of this experience.